In light of increasing feed prices and the growing environmental concern surrounding imported protein sources, many farmers are looking to produce their own high protein forages. The good news is there are plenty of options and the production benefits extend beyond providing protein.

There is plenty of scope for UK livestock farmers to be producing high protein forages, either by changing their management systems or growing specialist crops. While the primary goal is often to reduce reliance on bought-in sources of protein, there are other benefits too. For example, adopting a multi-cut approach to grass silaging not only increases grass protein content but also leads to better grass yields and improvements in overall grass silage performance. And both clover and lucerne help reduce fertiliser costs thanks to their ability to fix nitrogen in the soil – by up to 150kgN/ha. Red clover can also help condition soil. Let’s consider each in more detail.

Lucerne is an excellent addition to livestock diets. It is a highly digestible forage due, in part, to its rumen-friendly scratch factor. Even at relatively low inclusion levels, around 1kgDM/cow/day, it produces greater intakes and use of other forages due to more efficient digestion of fibre. It gives a good DM yield and has a high protein and calcium content. Protein levels range between 18-24%, making it a viable replacement for soya meal. And for those producers incorporating maize into cow diets, lucerne is a useful complementary feed being high in nutrients maize crops lack. 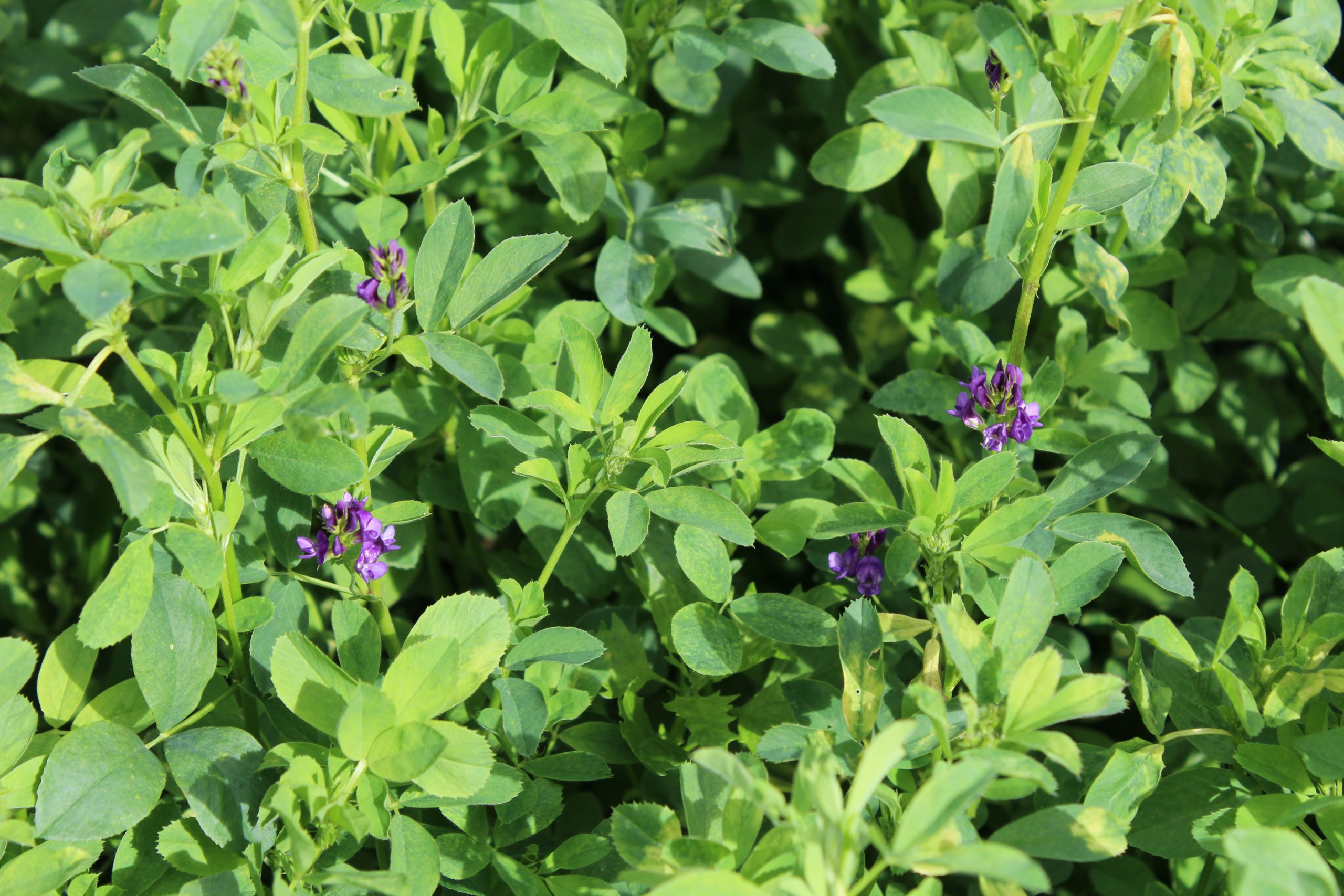 Despite its nutritional credentials, and the fact lucerne is extensively grown in many countries with similar conditions to the UK, farmers here often overlook it as a potential forage crop – possibly because there isn’t an established cohort of farmers growing lucerne in this country.

But don’t be put off. Lucerne can perform well in the UK as it is suited to all soil types, as long as ground is free-draining and – like other legumes – crops are sown when soil temperatures are above 8°C. This means most lucerne in the UK should be sown between May and the end of August, as yields will struggle during a cold spring. For the best performance, soil pH needs to be above 6.2 and lucerne should be drilled or broadcast into a fine and firm seedbed to a depth of 0.5cm – 1cm.

With the correct management, lucerne should persist for between four to six years and be able to produce 10-15 tonnes DM/ha, at between 18-24% protein.

Lucerne is most commonly grown as a stand-alone crop and cut for silage, although it does have grazing potential if managed correctly. When it comes to cutting and ensiling, the crop requires special handling. The protein content is in the leaf of the plant and this must not be shredded. Crops should be cut to a stubble height of around 7cm, using a drum mower, and tedding must be avoided. Four to five weeks need to be left between lucerne cuts and plants allowed to flower once a year to ensure the storage of nutrients in the tap root. This helps improve winter hardiness and boost spring growth. 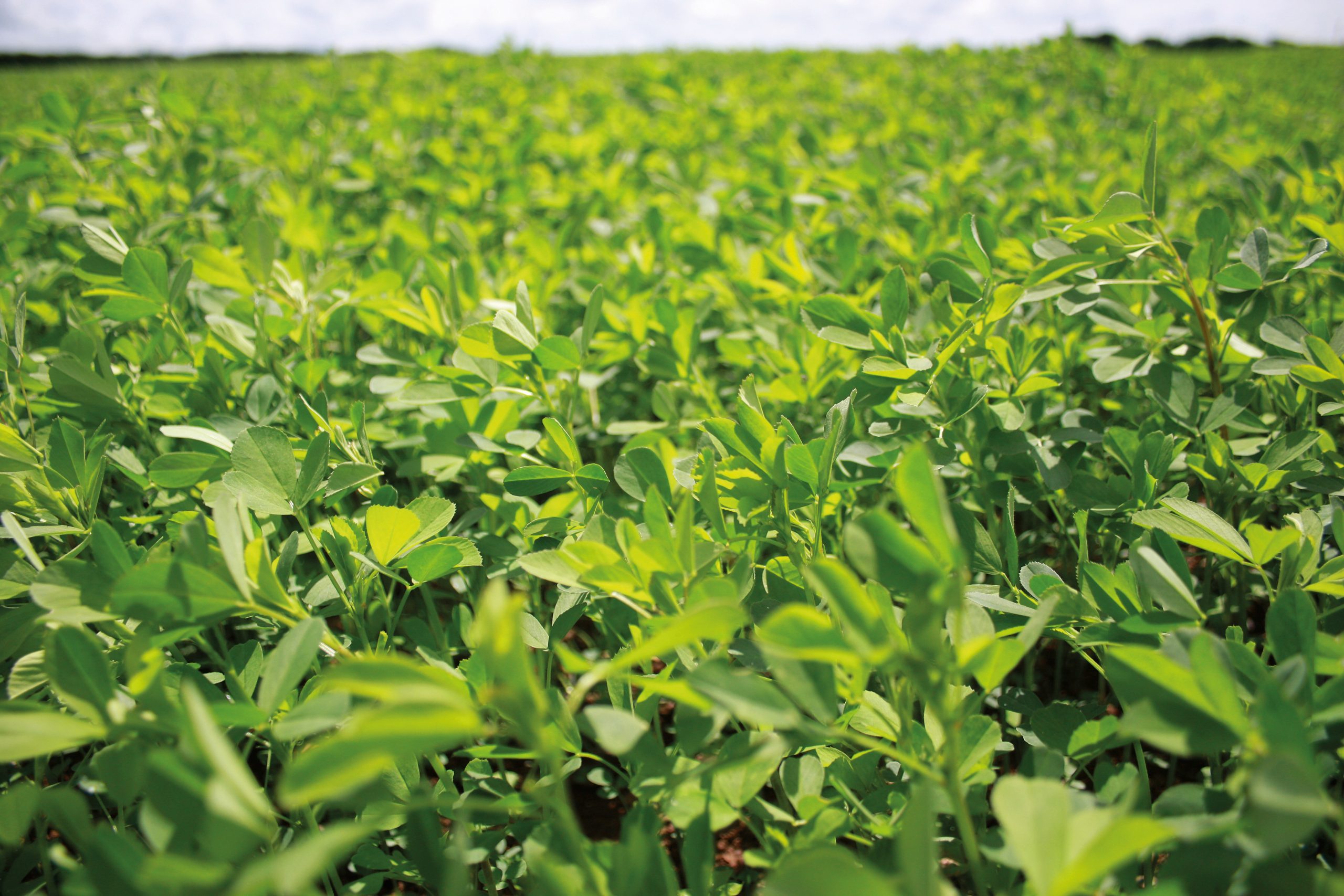 An increasing number of farmers are turning to red clover to help them produce high protein grazing and silage. If managed correctly, red clover has the potential to yield between 10-15 tonnes DM/ha and provide silage with protein between 16-20%. The protein in red clover is more available to livestock due to an enzyme slowing its breakdown in the rumen, increasing the amount absorbed in the lower intestine.

Red clover has been shown to support strong growth rates in livestock over the winter period and several studies have highlighted an increase in milk yield from dairy cows fed red clover silage compared to those fed conventional grass silage. The feed value of red clover silage is often much higher than analysis suggests due to the composition of its protein. 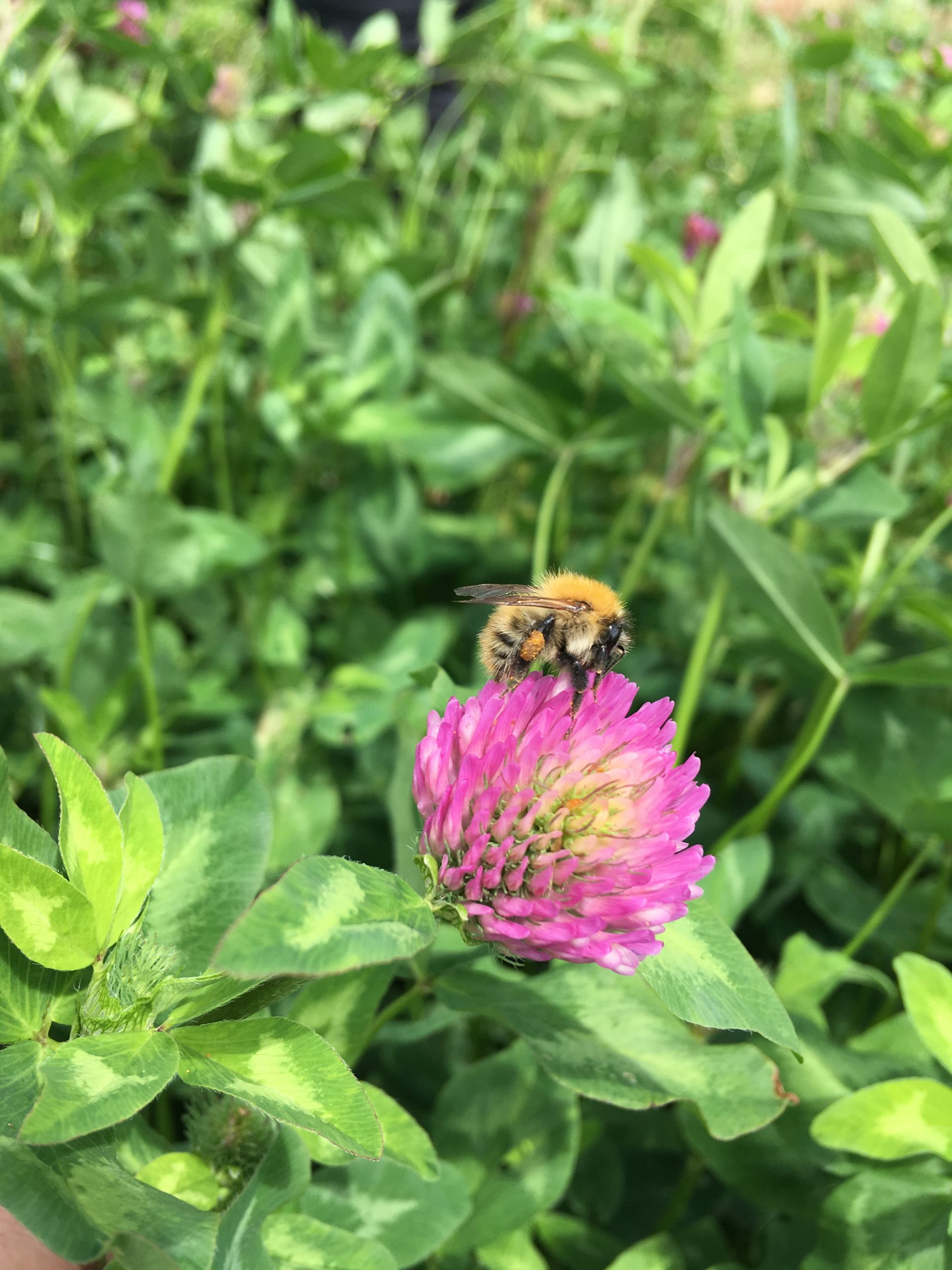 Most farmers incorporate red clover as part of a wider grass or clover ley. Its larger seed and fast-growing seedlings also make it suitable for overseeding/overstitching. Mixed leys, in which red clover is included at a rate of 7kg/ha, should be sown at 30kg/ha. Red clover can also be grown as a monoculture, typically when the goal is to produce high protein silage. If this is the case, sowing rates need to be much higher, at 15kg/ha. Whichever way it is used, it needs to be part of a rotation, with a six- to seven-year break between leys in order to reduce the risk of sclerotinia and stem eelworm, which are both soil-borne.

As well as providing plenty of protein, the other appeal of red clover is its ability to fix nitrogen in the soil. Rhizobium bacteria and red clover root nodules co-operate symbiotically and produce nitrogen, reducing the need for nitrogen inputs to stimulate plant growth.

Care does need to be taken with red clover to prevent livestock suffering bloat. To minimise the risk, limit access to red clover grass leys when livestock are first introduced. Don’t turn animals out on to red clover when they are hungry; provide a supplementary, high dry matter feed prior to turn out. 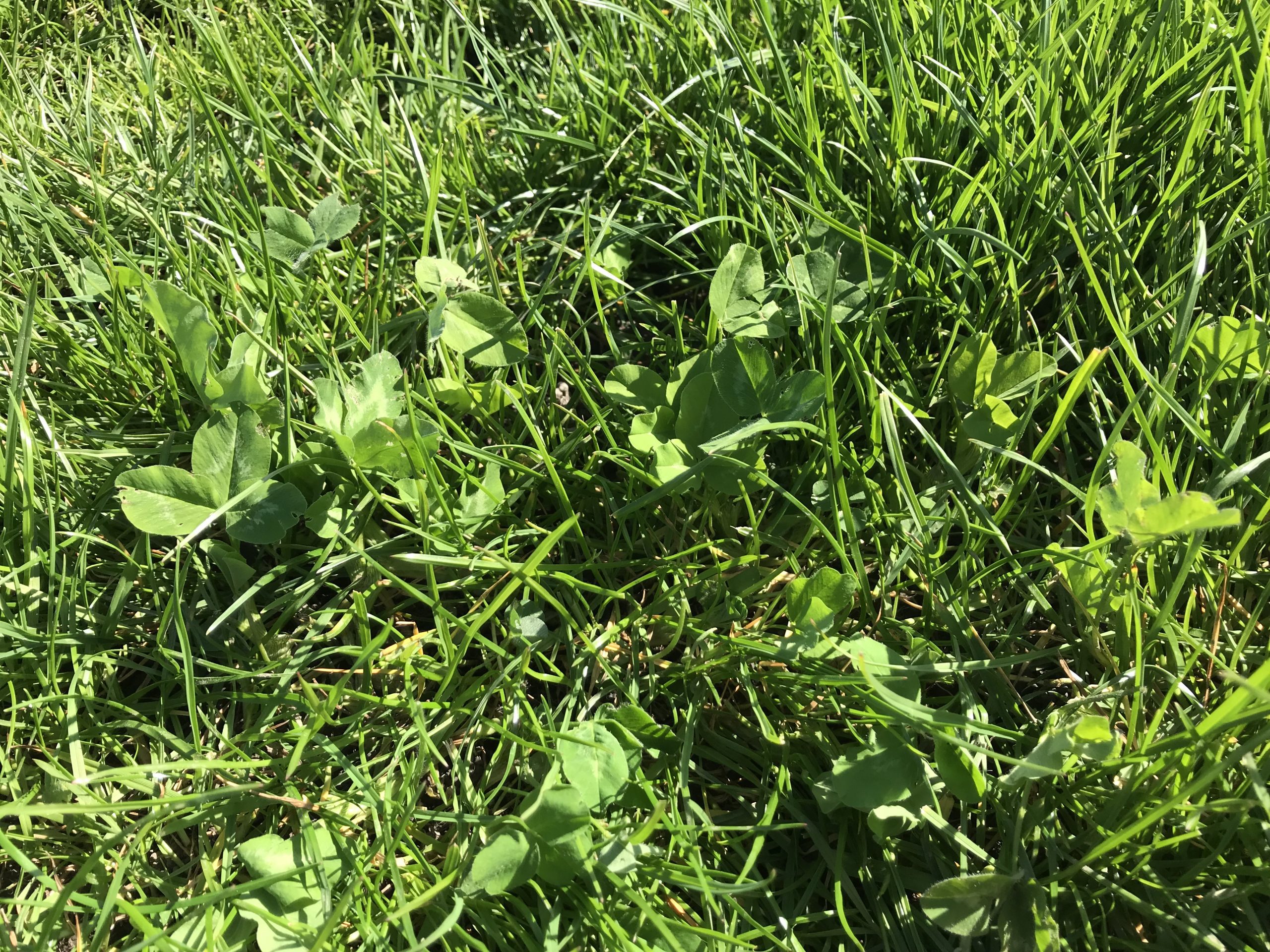 Embrace a multi-cut approach to silaging

While specialist crops are very good at increasing the protein production potential of a farm, complementary, protein-boosting grass management methods can’t be overlooked.

Another way to increase production of homegrown protein is to change the approach to silaging. Multi-cut is becoming an increasingly popular choice for increasing silage quality and yields. Fresh weight grass yields can stand at around 17.5 tonnes in a five-cut system, while a three-cut will typically produce closer to 14 tonnes.

Need to Know:
Growing Lucerne in the UK

Photo Credit: Farmers WeeklyCongratulations to Grace Welling from Germinal GB who won the...
Photo Credit: Farmers WeeklyCounty Down beef and sheep producer Sam Chesney was announced the...
In the current economic and political climate, grassland management continues to be an area of...
When to reseedBoth spring and autumn provide opportunities for a successful reseed; deciding...
View all
We use cookies to ensure that we give you the best experience on our website. If you continue to use this site we will assume that you are happy with it.OkPrivacy policy